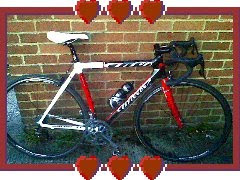 Today was an "half ironman training day" organised by one of the guys from club targetted at those of us who are doing switzerland IM but was open to any of the club or friends of club who fancied taking part. We weren't allowed to call it an "event" for H & S reasons but it was being timed and marshalled etc so it was really. There were only about 40 of us, some doing just Swim and run, some only doing part of the bike, some only doing part of the run.

I had intended originally only doing the swim and bike as they're my weaker disciplines and I've got Florida 70.3 in two weeks and thought it might be a bit much. I then decided I'd do half the run so I could get a good feel for the bike - run transition.

Last week was a 20 hour training week so this week i've been pretty pooped and hadnt taken a rest day for 10 days, so had Monday & Friday as total rest days, and thursdays sessions were chopped to a 30 min run, a body balance class and swim. I rode Tuesday and Wednesday though because I got my new bike finally after B was written off in the accident earlier this year. The bike is A-Mazing!! I'm in love with it, the difference between full carbon and aluminium is insane. Thankfully Mike had given me his old Scott bike, so i have been able to carry on training, and I think training on the heavier bike has actually been a blessing in disguise.

I wasnt really that fussed about today, some of the others were getting stressed about it, but as far as I was concerned it was a training day or dress rehearsal for Florida, so was mucking about fitting tri bars and downloading music til midnight last night instead of getting a decent nights sleep.

My alarm went off at 4.30am and I made some porridge, loaded up the car, minced about til 5.30 and set off to the lake. Everyone else was already there by the time I arrived as there was going to be a briefing at 5:45. I racked my bike on the scaffolding we'd been lent and went and got my wetsuit on. Came back and got Mark to lube me up so i didnt chafe in the lake. Noone likes chafing!

The swim route was 1.9k - two laps round the buoys with a short beach run between the laps, we got in to get wet and used to the cold water then went back to the shore to start. We set off, and at first i thought perhaps i'd be able to keep up with the pack. But with a few punches to the head from passers by, i soon found myself pretty much alone. I just concentrated on getting round, and not going miles out into the lake like i have been in training and making sure I spotted regularly.

I came to the shore for the beach run which was just a few meters, round a bollard and back in, i glanced behind to see only about 4 other people in the water and everyone else miles into the second lap and said "Wow i'm shit!" to the marshalls. and jumped back in for the second lap.

About half way round the other shit swimmers were gaining on me and starting to overtake, i tried to stay with them, i really didnt want to be last out! Coming from the last buoy i picked up some speed and pushed on to get out before them! Phew!! I wasnt' last!! Very nearly but not quite!

I checked my watch in transition and saw I'd got round in about 38 mins, which despite being so near the back I am really happy with.

I took my time in T1 to make sure i was comfy, I um'd and ah'd about whether to wear a jacket over my tri suit it wasnt even 7.30 yet but it looked sunny i decided to wear a jersey and if needs be i could drop it off.

I got out on the bike, my beautiful new shiny bike and set off on the course, it was a 56 mile flat course of out and back and out and back with the two of the turnarounds a big steep hill.

I was flying, i did the first 10 miles in a smidge under 30 mins, and overtook a couple of people. I was loving this new turn of speed. I dropped my jacket at the first turnaround and whizzed back down the steep hill, it was all quite uneventful but very enjoyable, I got to the second turnaround and got confused and carried on thinking i'd not reached it yet, going a mile in the wrong direction before realising the turnaround was back behind me. "bugger!"

I got back on the course to find i'd been overtaken by a few people! double bugger! I caught up with a couple of them, stopped for a wee in a bush, came back to transition. Swapped shoes, downed some jiz gel and straight out onto the run. Did the bike in 3hrs! Wow, i'd never thought i'd do that, and i did feel like i could push harder but I hadnt wanted to jeopardise the run too much (or burn out for florida)

The run was 13 miles, or 6 laps of the lake. I was going to see how i went, and maybe do three. I got on the run and felt great, no jelly legs and got straight into a nice rhythm, the first lap took about 16 mins, as did the 2nd. I was really enjoying it. It was getting pretty hot though. I decided i may as well just complete it and get a proper feel for how a half ironman feels. I over took some people who were on their last lap, some who were on the same lap as me, some who were only doing half etc....the last lap was painful... well more heavy legged than anything, i didnt get my nutrition quite right and could have done with more fluids but i was nearly home now so plugged on and managed a respectable 1:45 half marathon time.

My total time including transitions was 5:35 which i'm amazed at. I had previously given myself Plan A, B and C for florida sub 6 hours was Plan A and i thought highly unlikely! So i'm going to go for it in 2 weeks. Taper, nourish myself properly and kick some ass! Only trouble is its going to be a non wetsuit race so i'm pretty worried.