Well as the previous posts suggests, I'm a total novice on a MTB but I entered this with the intention of going as long as poss and having fun.


I'd ridden round the course twice previously - both times having several offs. The first time was embarrassing, Phil took me round and i was getting off to go over rocks - "surely you can't ride over that??" sweet Jesus!
The roots were lethal, (and there were so many of them!!) what was I doing?
The next time (last week) was much better, it was after Afan where id gained a lot more confidence and although i was still slow over the obstacles compared to the guys I was going over most things, so was happy to do the event (so long as it didn't rain and make it all slippery scary)


This is by no means an excuse but I went out "For one..." on Friday night, i was looking at the clock at 10 thinking... 2 glasses of wine, that;ll do, go home now and you can have a good night sleep....
i did this again at 11.. then 12..... then finally after about 2 bottles of wine, several rum and cokes, then shots I rolled in about 2.30 steaming drunk! i fell into bed only to be woken by my alarm clock half an hour after it had first started going off.
With some "Shit, fuck, bugger, ouch my heads" i got up still pissed, threw everything i though i might need into a hold all and got on my way to Bristol. When i turned up the others had all got up ( they'd camped) and i made my way in a haze to the registration tent. got back sorted myself out.
I'd bought some tassels, a big pink horn and some spokey dokes for affect unfortunately the spokey dokes didn't fit :( but the tassels looked cool! 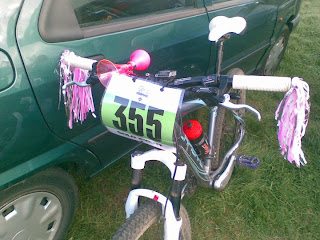 I had everything I'd need for the day as I'd not wanted to stop - the idea was to do as many laps as possible in 8 hours. I knew i was slow so had to rely on my fitness to keep me going.
The start was at the bottom of this steep hill (on foot) you had to run to your bike then go. I jogged up the hill to where Chris was holding my bike for me and tootled off. There were a few hundred people to get through a small space at the start of the trail so i hung back as i didn't want to slow people up with my slow snail speed down over the first section.
Once on the trail the course is really bumpy, big old rocks then into a nice sweeping gravel single track section, over more rocks/roots, off up the side of a road, up a steep hill down back into a trail over more rocks, down a big steep ditch drop off and back out the other side (the first 2 times i chickened out and walked)!) out across a field, back into the trail, more rocks, roots, up a maaaasssive steep rocky climb, down a steep descent, through a really twisty technical section, through more woods, into a field briefly, up another even rockier steeper climb then straight down a wall which i hated the first time but by the end was loving. Then out across a field, up a gravel track back to the start again.
I was having a great time, pottering about, tooting my horn at everyone who went passed. At least 75% of people who went passed commented on my tassels, and by the end of the day i was know has "Tassels" or "solo tassels" i was tooting away and people seemed to enjoy it. I took about 40 mins per lap and I had hoped to do 12, but I had a little stop for 2 or 3 mins after the 3rd lap, to eat something then did this after every lap, half a jam or ham sarnie after each lap, then 10 mins after 4 hours, to go for a wee, refill my camel bak, have a little chat with the other MB Swindon team. I kept this up for the next few hours. I got to 9 laps and realised I wasn't going to manage 12 - you had to be back from your lap before the 8 hours was up. I got 11 in with 15 minutes spare.

My shoulders were killing and I had wankers wrist my legs felt fine and i had more in the tank. Phil handed me an MB Swindon sweatshirt and told me I'd need it to wear on the podium for the photos and prize giving... i dint' understand...  I'd come 3rd!! :)

i had no idea, I'd not gone with the intention of getting placed cos I'm new to this and really shit, if I'd know I'd have pushed a bit harder... especially now that i found out i was only 6 mins behind the 2nd lady! I knew I shouldn't have stopped for a slash!
All in all it was a successful day, as a club we did well, no injuries or mechanicals. and a great laugh!
The boozing I realise has no bearing of my performance, if anything the wine was a good carbo loading tip.. spesh as I didn't have any dinner the night before! 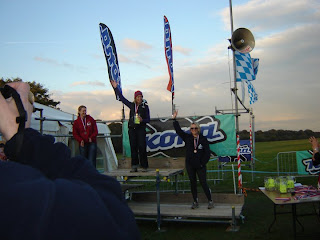