It's been a long while since I've written on here or indeed done any races. This was more of a fun thing organised by a friend at running club - the following details were emailed round

"All
I won't be there tonight but can I ask if you want to run in the Boxing Day Great Canal Relay.
Those who have been doing the race since it started will be interested to know that this year is the 80th running of the event!
For those who haven't done it before this is a 6-leg relay race which starts at Bradford-on-Avon at 9.30 on the 26th December.


The lengths of the legs are about 2.5, 5.5, 2.5, 2.5 5.5 and 5.5 miles (although most of those lengths are wrong)
It finishes at the French Horn at Pewsey Wharf at about 12.30 where we have a drink, some
food and the presentation of probably the greatest prize in running.


It's not a race that's taken seriously - in fact everyone is discouraged from winning as this is seen as un-sporting.


"Competitors" are encouraged to run in fancy dress although this is not in any way compulsory.

Please let me know if you want to run and if so how far.


You can run any number of legs, although to be fair, no one has ever run

I was down to do the last leg (5.5 ish miles) my runnings been hit n miss lately, with a bit of a knee niggle hampering things but marathon training is underway and I've managed one 18 miler and getting some commutes to work done which is 9 mile each way - since i have no car i have no choice but to run or cycle so it's a blessing in disguise perhaps.

Anyhow, i received a call on Christmas day from the organiser to say both our clubs runners for leg 3 had pulled out for various reasons so would i do that one as well. So I agreed, he told me it was about 3.5 miles... if you look above it says 2.5....?! whatever it was all for fun.

Boxing day morning and I wasn't very well organised as I was staying at my folks I had my kit with me but nothing really very fancy dressish. At home i had an elf and Santa hat I'd been wearing on my bike but that wasn't very original, so I stole pops car and nipped home and had a quick rummage. I pulled the fairy lights off my bike (I'd been getting festive on the bike) grabbed a green dress and green tshirt, the angel  off the Xmas tree, a string of tinsel and ran back out the door.

The sat nav took me where I needed to be for my first leg, it was minus 6 and there was snow everywhere, but it was beautiful. I'd become quite used to the cold weather cycling 20 miles a day for work and running sometimes 18 but it still felt cold. I sat in the car park and transformed myself into a Xmas tree. I looked shabby apples but it got the desired affect, shame the lights weren't really visible in the daylight or it mightve been better. Then angel pinned to my head and i went to meet the others at the change over.

There were about 10 teams  - lots of others were dressed up too, one lady was in a skimpy elf costume, she looked freezing!! Others were dressed suitably for the baltic conditions. The canal was one thick sheet of ice, the barges all frozen into place. It wasn't long before the first runner came through and changed over. In the distance I could see a caped man running our way, it was our number 2 runner. We were in 2nd place, he slapped my hand and i bombed off.

It was so pretty out, lots f walkers with their dogs and kids, i said merry Xmas to everyone i passed, looking like a right dafty! I soon became really hot and took off my gloves. I felt like a little bunny skipping through the snow. It was really nice, i was expecting lots of ice but the ice patches were few and far between. My toes were getting pretty cold though! The last half of my leg was up hill... i questioned this when i got back - how can a canal path go up hill!? Someone said "that's why i didn't want to do that leg" cheers. ;-)

I powered up the last hill to the next change over not far behind the front runner, I'd gained a bit of time on him during the run. A lady looked at my feet and said "i thought you had spikes on the way you came up there so strong" which was a nice compliment :) the angel's head had fallen off and i was really hot now!

Someone had driven dad's car to the changeover and we drove in convoy to the next one 3 or so miles away. I had time to drink some coffee and take a slash behind a bush. watched the leg 4 to 5 changeover then on once more to the final leg. I decided to run this one in just my running gear as it was really hot before

I was told it was a bit confusing, you had to cross some of the bridges, but "not this one", "make sure you don't go into the woods"
"so i go to the woods and then over a bridge?"
"no"
"is it not obvious?"
"no"
"can't i just follow the person in front?"


um.. no, our runner was coming in, we were in first place. shit.

Ok, i was off at a pretty quick pace, then i realised i had nearly 6 miles to go so pulled it back a little. The snow down here was much deeper and untouched. it was brilliant, i bounded through like a kid. So tempted to do snow angels but i could see someone in the distance behind me, i kept checking to see how quickly he was gaining on me, not fast but he was going to catch me at some point. I pushed on, not knowing which crossing i had to take, where the woods were. Bouncing through ankle deep snow smiling.

The guy was about 20 m behind me now and i wasn't sure where to go, i shouted back "is it this bridge"  - "no" he yelled i ran past it and there's no way over it anyway!

I did the same at the next bridge, again no. After this one he was right on my shoulder, i was tempted to hog the path so he couldn't get through but i let him past. I asked if he was the guy doing it solo but he was doing it in a pair. He had a nice bum and legs that went on forever!

I couldn't keep with him, so i dropped back further. I could see about 500m in the distance the finish area where the crowd were waiting. I could also see a little way behind me, another runner. I started to dig in, but it wasn't quite enough. I was blowing, I could hear him gaining on me, i pushed harder, my legs burning and my chest tight, he was right there on my shoulder. 100 yards to go... i pushed. Again I thought i could just hog the narrow path... but i moved across so he could pass, i tried to stick with him, i contemplated pushing him into the frozen canal!

He pulled away from me and with 5 seconds between us at the finish, we were both near to vomitting!

It was declared the closest race in the history.

The guy in the pair was dq'd cos he had no lady in the team, so we got 2nd and 3rd (our other team came in a few minutes behind)

We went to the pub to get a pint to find the pipes were all frozen so no beer :( so i had a rum n coke and waited for the rest of the teams to come in.

The man with amazing long legs was even nicer from the front. (his face not his member!)

Next year they're thinking of drawing names out of the hat to decide the winners. :) 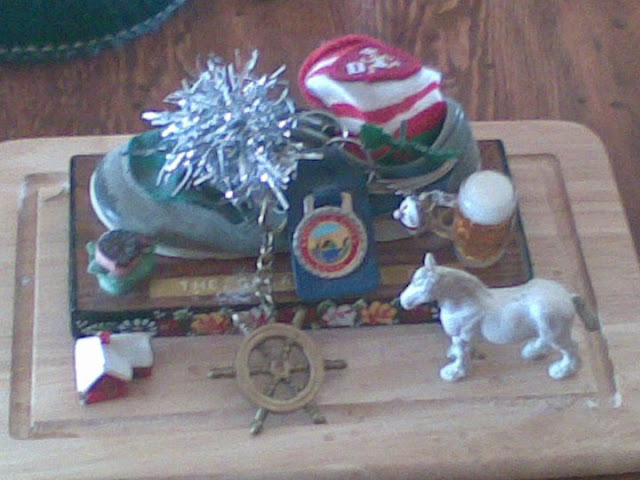