It's not often that a race plan goes so well.

It was a Plan B of sorts mind.

I've been pretty under the weather the last few months, what I had thought was a "bit tired and run down" through excessive hours at work, limited sleep and general life stress had rung alarm bells with Robbie who sent me to the quack to get some blood tests.

I'd not lost my Mojo, not by any stretch. When I managed to find time to get out running I had a great time and had been getting out with lots of friends and loving it all. Just that I'd lost my get up and go, and anything more than an hour left me dragging myself along the floor with a sad face.

I got my blood test results back to find that my Ferritin level (which is some kind of precursor to Iron) was off the bottom of the scale. The doctor suggested this was why I've been feeling so shitty. She prescribed some Iron tablets and a recall blood test in 3 months to check my progress.

That was about a month ago now and already I'm feeling much better. I'm also making a conscious effort to  love myself a bit more, get more sleep, spend less time in the office, spend more time with the people that matter, pay better attention to my diet and lifestyle. You know. Grown up shit.

Swennyway. I'd entered this race only because Doug had entered the Marathon distance, I didn't really fancy a Marathon after the busy summer of mountain races and feeling quite crap. Having done Lakeland 50 at the end of July, followed by Ultraks Matterhorn at end of August, this hadn't really left much time to recover, do any kind of speed work and get "race fit" i.e. get a chance of a PB. At best it was going to be a nice weekend at the seaside.

We had a nice little mooch about Bournemouth on Saturday and watched the 10k race, then met an old friend Kris Duffy for Pizza and a catch up. He was doing the Marathon too. 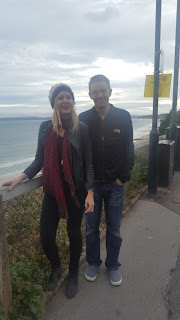 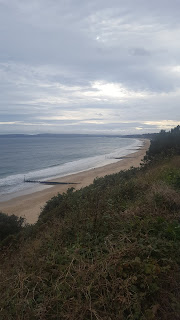 We got an early night, although I took ages to get to sleep and had weird dreams. Probably from watching Stephen King films whilst going to sleep.

My race was starting at 8 and the others at 10. So unlucky for Doug he came to my start with me.

Earlier this week, Robbie and I had had a chat about goal setting for next year and discussed this race. Knowing that a PB was out of the question, he suggested that I aim or a negative split. I suggested that I do a progression run. (Meaning I would get faster over the course of the race.) Negative splits are the dream for any road runner. I've never achieved it. I've been crap at pacing forever. The closest I came was at Milton Keynes marathon where I ran an almost even split. So that was the goal. Of course, it can be achieved by walking for the first half but I still had some general time in mind (sub 1hr 40 would be awesome)

I hadn't fully decided what pace I'd set off at but that I'd increase my pace by 10 sec per km every half hour. I'd see what felt right on the morning.

Once I was at the start and nervous belly had settled I bounced around a bit and did some mobility stretches, the weather conditions were spot on and wind was low so I had no worries on that.

Soon we were off and I settled in to a 4:50 min/k pace. It felt really comfortable so I decided to stick to that. My legs kept trying to go a bit quicker but I kept an eye on my average pace to keep it at 4:50. Knowing that the next step would be 4:40, then entering the hurt locker at 4:30 and hanging on as best I could to the end.

As I hit the lap button and picked up to 4:40min/k pace it still felt *fairly* comfortable. I  let myself relax on any declines and tried not to knacker myself on the small inclines. I was overtaking people all the time now, the people who had set off too quick (how I normally do) and felt pretty smug!

Coming up to the hour mark I was around 8 miles in and knew there was a bit of a bastard hill coming up. I'd picked up the pace to 4:30, it felt fine on the flat but almost immediately it was time for the hill. Fuck me. It was a bastard. It wasn't that long - a few hundred metres but it near broke me. My pace dropped right off. I was gagging up over the top hoping that I'd be rewarded with a nice descent but it was a long flat/slight climb still so I continued to suffer and try to drag my average lap pace back to where I wanted it. It was dropping back gradually from 4:50 to 4:44 where it stayed. Damn it.

Finally I reached the descent. I let myself go, I'm pretty good at descending now after the mountain running I've been doing the last few years, took a few more places and managed to get my average pace back to around 4:32min/k and hold it there when I got back on the flat. But it wasn't entirely flat, it was about 1.5 miles of really slightly up. But it was an out and back so I was relying on it being a slightly down back. I only had a park run to go now, but it was hurting. Hurting hard. I tried to keep the pace on. I reached the first Pier and started down it, I  had dropped back to 4:33 pace, I relaxed a bit knowing that it was a slight descent to the next pier, come on, less than 2 miles.

Somehow I missed the last mile marker and was thinking that it was going to be a long half, I missed hitting the last 30 min lap split. It didn't really matter. I was trying to keep my form, trying not to piss myself, keeping my arms and legs pumping and focusing on getting to the end. I was struggling to keep the pace on but only had 0.6miles to go. I knew if I held on I could get in under 1hr 40. I rounded the end of the 2nd Pier and pushed hard for the last few hundred meters. I could see the clock time getting near to 1:40 and urged myself forward to get in under it. Knowing that my chip time would be a good minute or so better due to the delay at the start.

I got over the line, with sub1:40 on the clock and sub 1:39 on the chip. A decent negative split and almost the progression run I'd set out to do. The last split was 4:34 average pace. 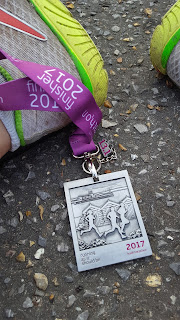 I am over the moon. I've never run such a controlled and sensible half marathon. I normally do a massive positive split and hate myself for the last 10 miles.

I collected my bags, got changed and made my way to the beach to support Kris and Doug. Whilst I waited I took a little dip in the sea and enjoyed some amazing Autumn warm sunshine. 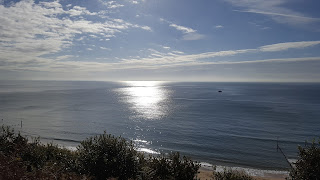 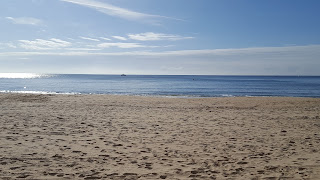 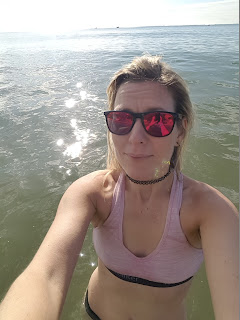 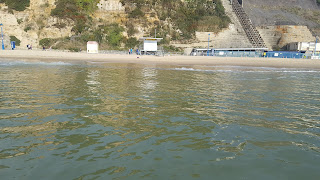 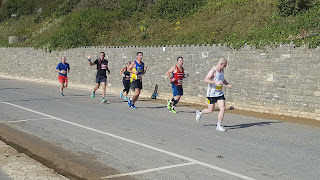 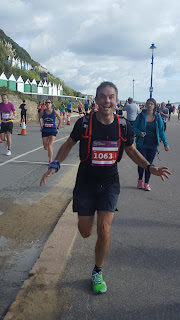 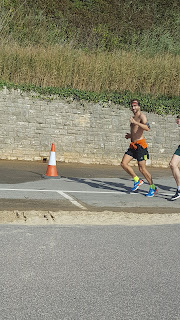 Doug and Kris both did amazing and we're all pretty happy with ourselves.

Next event for me is The OMM then a lovely 2 week trip to Thailand (naturally with a little adventure in it) to recharge my batteries after a crazy year.