I’ve left social media for a couple of months to focus on tangible things and be more productive. I have been feeling a little superficial lately, not really living in the moment and whilst I love that SM keeps me connected, I do feel as though I waste a lot of time on it and don’t get enough time to focus on the people I’m connected to in “real life” – after all they’re the ones who make the effort to see me physically, give me hugs when they’re happy to see me or I’m feeling blue or call me for a chat or text to make sure I’m alive. So I don’t really expect anyone to read these posts if I’m not sharing them anywhere.
So anyway, following the TDG, I had this annoying feeling of imposter syndrome and somehow felt guilty that the race didn’t mean as much to me as it did to other friends and that I somehow did it a bit of an injustice. I now feel like I should have tried harder – but really I know that in the moment, I felt like I was giving it all I had under some difficult emotional stress.


I surprised myself by the speed in which I bounced back physically. I was able to run later that week without any real issues, did some pace work, I even did a park run. I was hyperaware of not overdoing it as previously I’ve done this and suffered from it longer term.
Mentally, I’d prepared myself, in the only way I know how - by having a jam packed diary for the next few weeks.

Doug and I spent a few days in Italy to unwind after the race, which I’m so glad of. Monday I pretty much didn’t leave bed all day, Doug fetched baguette and butter and basically I just dipped bread into butter and tried to put on the 6kg I’d lost during the week. I’d taken a picture and I looked vile – like an anorexic boy so didn’t care what calories I put in me (it’s all gone back on and some more – fat bitch). Tuesday we went to an incredible spa just outside Courmayeur. I have a terrible habit of trying to fit in too much into a small space of time. I’d originally suggested we drive to the beach for a few days – he talked me out of this thankfully! 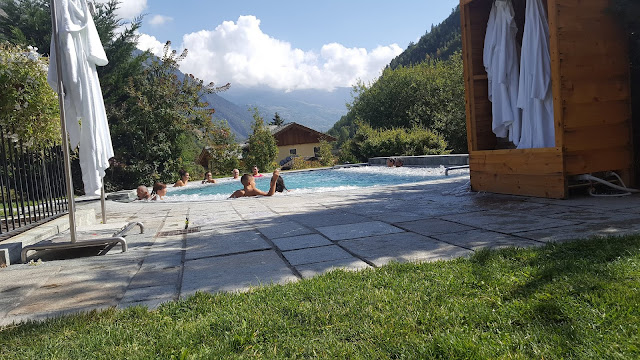 We got back on the Wednesday night, delayed and I did a little work on Thursday from home whilst I washed piles of stink kit. It was a few days before year end for me, so I knew I had a horror story for work coming up. I was supposed to be heading to Germany for a couple of days the following week but I received a call from my friend Kris Duffy asking if I fancied a free two day trip to Italy on Wednesday for some running promotional photo shoot thing with Alberto Tombo (of the Skiing fame in the 80s and 90s) – of course I did! On Friday, we drove down to Croyde for our annual trip with our friends to a gorgeous rented cottage where we ate and drank and surfed and ran and generally had a wonderful time. I can’t get enough of this group of people, most of whom I’ve been friends with for over 20 years, the others are acquired boyfriends and husbands that we’ve accepted into the group. 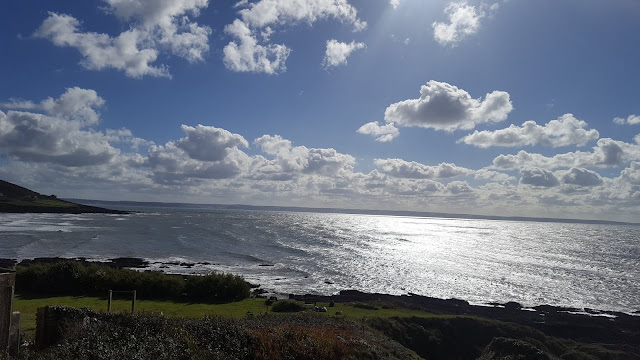 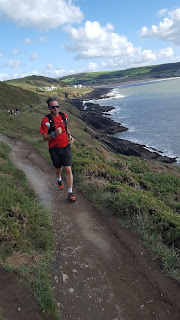 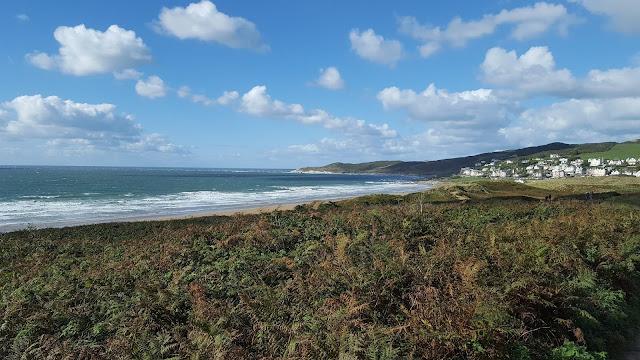 I returned to work on Tuesday for a day rearranged my meetings in Germany and headed off to the Emlia Romagna region of Italy with a group of total strangers. I was met at the airport by the lovely Francesco and Sona, from the Czech Republic and driven to a lovely quiet hotel in what felt like a remote part of the hills. 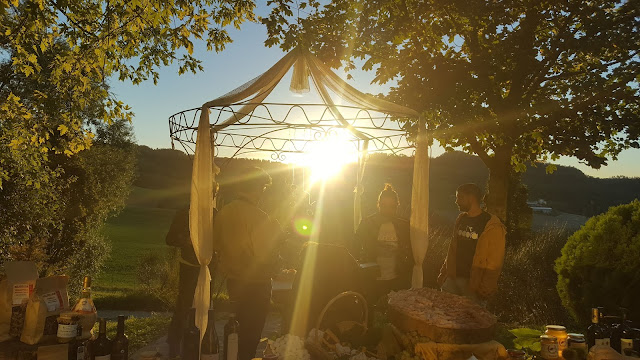 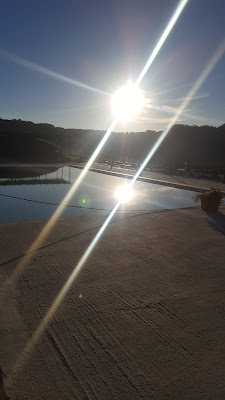 It was quite different to the previous week in terms of terrain and vista – still hilly but much flatter and panoramic. The weather was gorgeous, the hotel was great and the company brilliant. The crew were all super lovely and we had a great time, eating and drinking, I felt like I’d been sucked into someone’s family as we sat around chatting. My understanding of Italian proving far better than my speaking of it, I was able to laugh along to some of the chatter. Over dinner I chatted to Alberto, trying to learn more about his career. He’s quite a celebrity in Italy, so I felt a bit rude that I didn’t know who he was aside from some googling whilst I was on the train to Gatwick, so was probably confused why I wasn’t swooning over him. 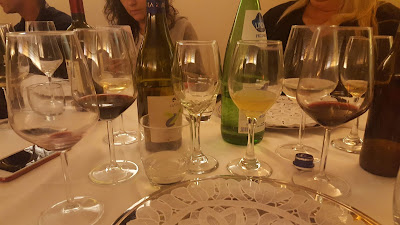 We were all a bit pissed when I arranged a run at 7am the next morning – I’d like to say that everyone made it but I’d be lying. Still it was a lush morning and I got to see an amazing sunrise. 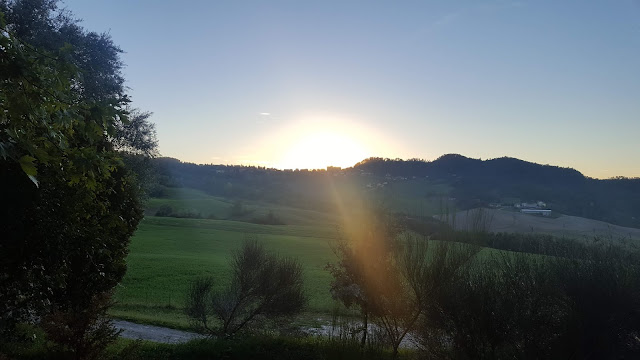 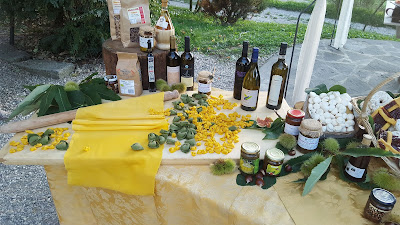 I ate the most incredible food I think I’ve ever eaten whilst there – and waaaay too much of it. I think the hotel staff were trying to showcase it, and that they did!

Returning from Italy was followed with year-end which went fairly smoothly, my analyst is off sick so I had several very late night/early morning finishes in the office but nothing I’ve not been used to over the last couple of years, and frankly I felt a bit bad that I’d not been in the office much lately. Over year end I had a bit of a post-race low that I knew would come at some point. So I allowed myself a couple of days of moping, where I let the self-destruct button compress a little. I spent a night alone, enjoying my sorry state, listening to Jonny Cash, drinking a few Gin & Tonics and chain smoking. Reflecting on the previous months, pondering the future, assessing my current frame of mind, how to maintain the healthy mental state I so often struggle with, generally spending a bit of time on myself - evaluating my worth which I don’t get time to do.


Year-end broadly done and there was another trip planned; a work trip to Croatia from Tuesday to Friday. 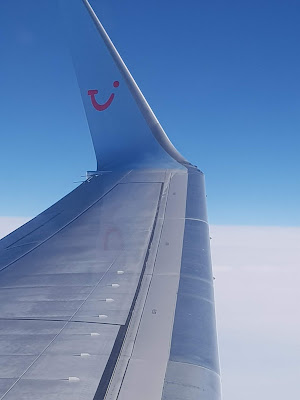 It was for the Group Purchasing business unit, which I’m not directly employed by but I’m Financial Controller for a really high profile project that is being delivered for them so I was invited along. The agenda was full. Tuesday involved 2 hours sleep, a 1am drive to Luton, bus to Gatwick, Flight to Pula, bus to Rabac where we checked in to the TUI Family life hotel – which was bloody amazing! 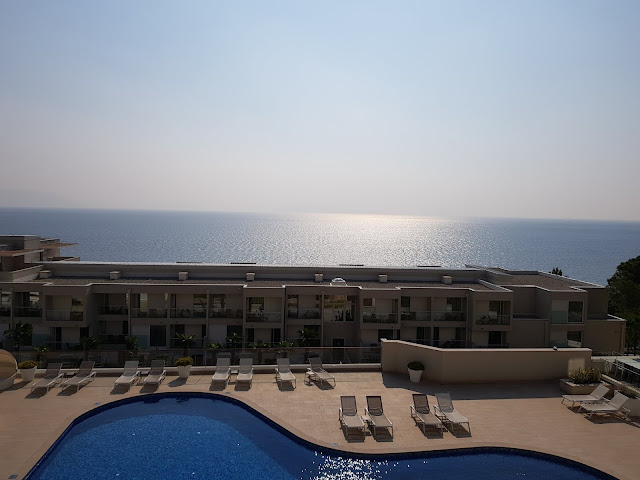 It was the end of the season but it was kept open for us for the conference – I wouldn’t fancy it during the season when there are kids there but if you have kids, you should definitely have a look and Croatia is beautiful. It’s definitely one I intend to go back to. 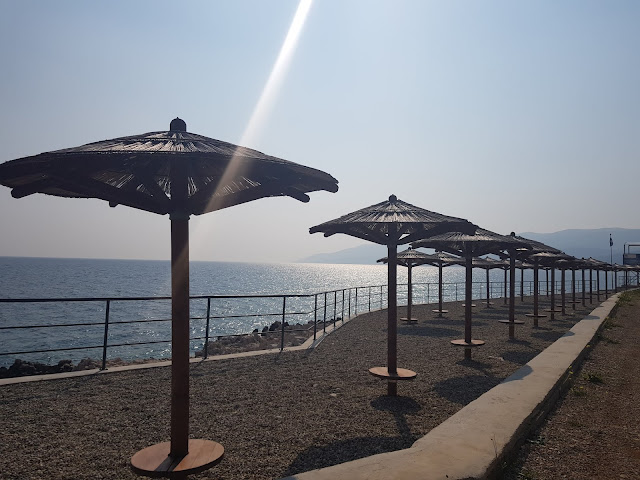 We had welcome drinks on the terrace, and me and Brett went for a run. It was a super sunny day and I was so happy with the trails, I could have run them all day. Surprised that they were so rugged, pretty technical but not super steep – though getting 300m vert over 8k wasn’t to be sniffed at. 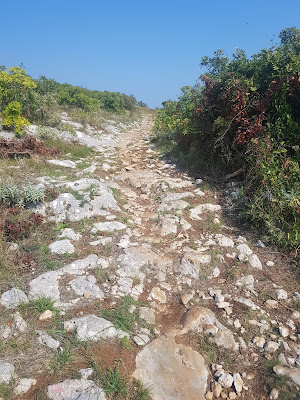 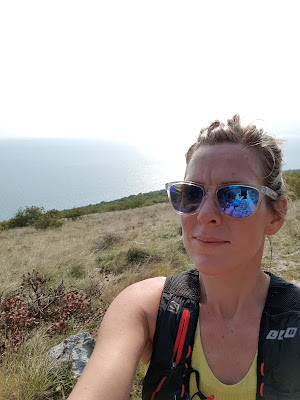 Back at the hotel it was lunch time so I joined some friends. They were planning to go mountain biking next so I said I’d join them. Some of you will know I used to compete at XC and Enduro so once upon a time was quite skilled so felt confident I could show the boys up on the jump park. Could I bollocks. I underestimated the terrain. It was bloody rocky. You just couldn’t get momentum and I kept grinding to a halt on the ascent. Which finally ended up in my getting stuck, falling sideways and really hurting my ass, arm and knee. I walked it off for a bit  but I’ve still got a huge bruise nearly a week later. 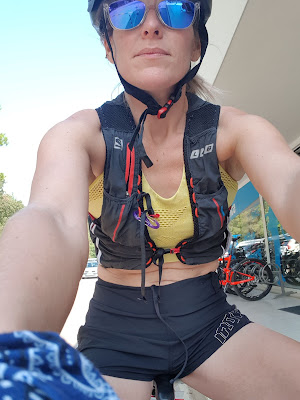 We had such a laugh and I really felt like I was living my life a bit more in the moment and making friends. We were all hopeless but it was really good to get to know each other better. We found a gorgeous little cove so dumped our bikes and went down for a swim. It was bracing and the pebbles really hurt my feet but once out on the shore the sun was warm and I found I’d cut the bottom of my heel  on something. It wasn’t big but it was deep and really hurt. I was convinced there was something in there but even now haven’t got round to checking – and it still hurts. I did some work where I could fit it in – which was usually in the middle of the night or at lunch time as I felt guilty that I was having a nice time networking whilst the rest of my team were finishing year end reporting. 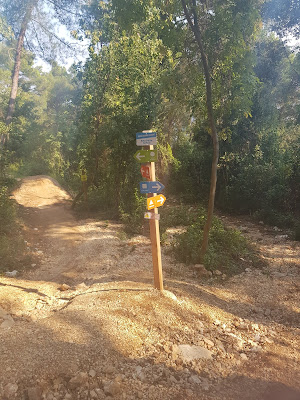 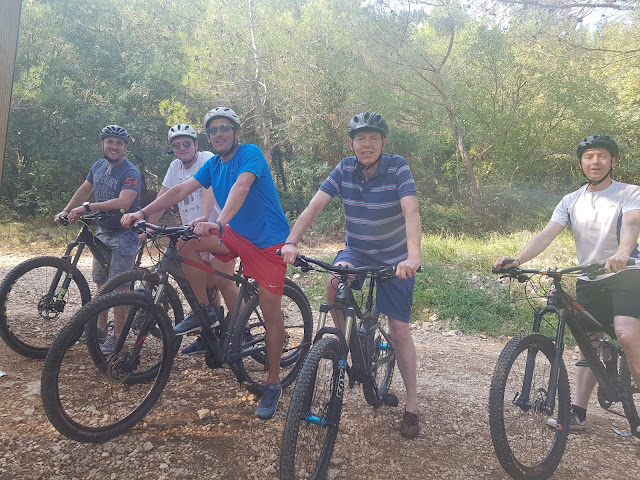 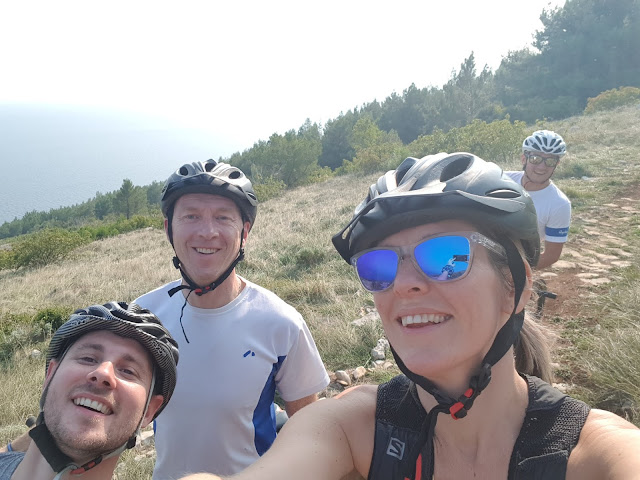 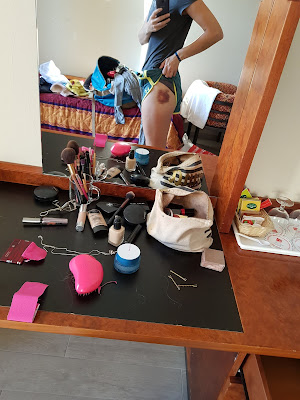 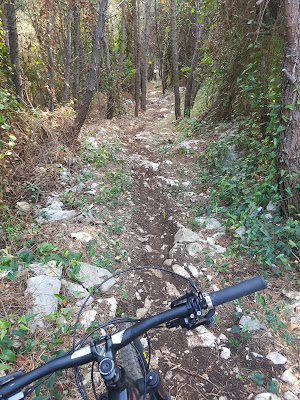 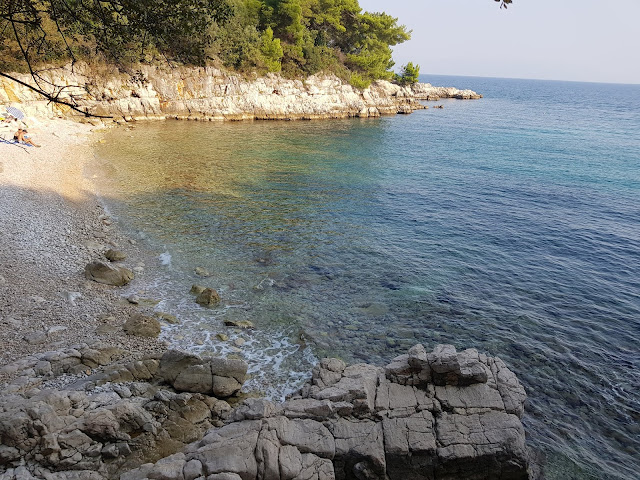 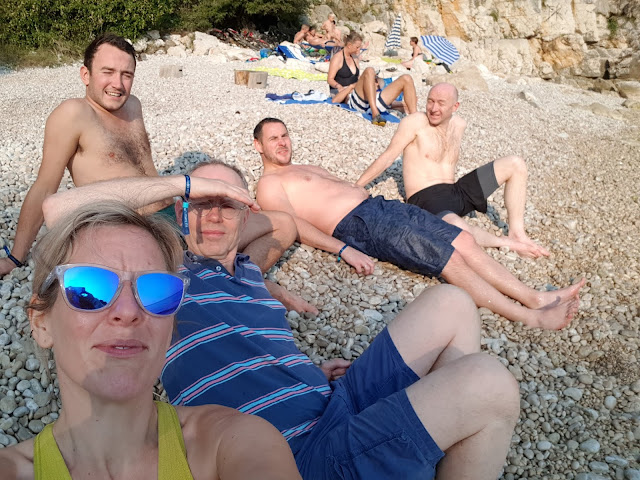 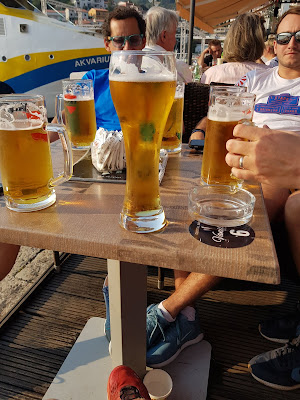 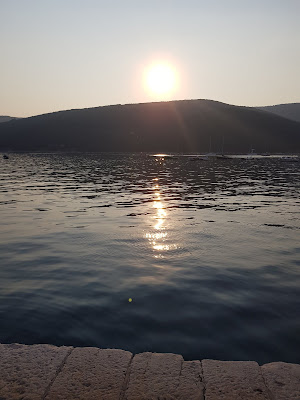 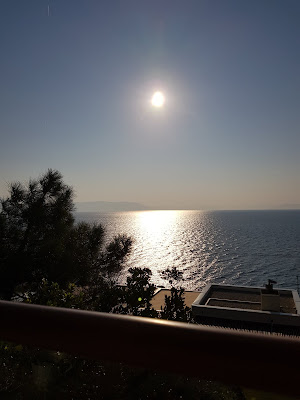 The rest of the conference was brilliant; lots of really interesting speakers, lots of networking, amazing food, fun evenings of drinking and laughter and really getting to know everyone better. The final night there was a big gala dinner planned, with a white theme so I finally got to wear a white dress I’d bought earlier in the year - everyone looked gorgeous and we had loads of fun.
We danced to the Abba tribute band then until the DJ wouldn’t play any-more, I got to bed about 3.30 and did an hour’s work whilst it seemed some of the others were still up drinking at 5am. I wasn’t able to run the rest of the week because of hangovers and my sore heel but I was surviving on so little sleep lately I didn’t think it was a great idea anyway. 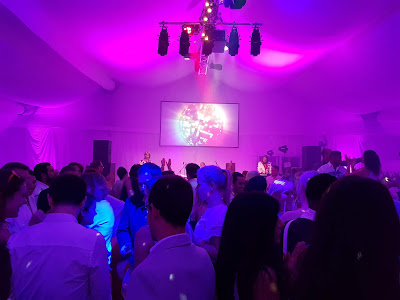 Sensibly, I’d only had one or two glasses of wine with dinner as I knew there was a 4 hour bus drive to Venice next morning and a race for me on Saturday. I worked solidly on the bus before my laptop died. I picked up a hire car and drove down to Lake Garda – it was such a beautiful drive. Not as nice as the Amalfi Coast drive me and Doug did a few years ago but it comes close. The temperature sitting around 26 degrees even at 5pm turning my non air-conditioned fiat panda into a greenhouse I sweated into the seats and enjoyed the route through tunnels  around Lake Garda that were carved out of the rocks - missed having Doug next to me nagging me to get off the car in fronts ass.

Which brings us up to date and to Limone Sul Garda, which I’ll get to in a bit.
Posted by anna at 16:39 No comments: