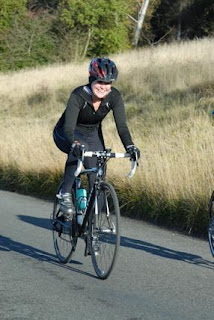 This one needs a bit of background....

Some months ago, my friend Suzie absently suggested this for me in jest... I looked it up, thought why the heck not and entered. I then asked around, did some research, read some reviews and found out more about what the hell I was getting myself into.

So what was that now?

"The Ballbuster duathlon takes you over Box Hill, near Dorking in Surrey, a total of five times with each loop being 8 miles long; twice on foot and three times in the saddle. It is a severe test of stamina and should not be taken lightly. It is the equivalent of running a marathon and should be treated with the utmost respect. Many fail each year"

So the last couple of months have been prepping myself for this... how? By throwing myself up as many big hills as possible of course. I'd raced half marathons purely for the fact that they've been hilly, taken my rides to work up the biggest hills i can find, got people to drag me out up hills at running club and requested "more hills" when out on evening rides, brick training at 5 in the morning before work.

The last two weeks I've been totally bricking myself, week before last I gave myself one last hill sessoin on bike and foot, then last week tapered - for the first time "properly" in months and months. There was nothing more I could do, except, rest, and carb it up a bit.

A couple of days before the race I had been given some great advice from someone who 's become something of a mentor (and i hope he doesn't mind my assuming that label on him!) one of these being, to set my hrm to 80% of my max hr and to maintain that through out the race, and have it so it beeps if I drop below. So with pep talks from him and from Suzie I felt a bit less scared and a bit more excited about it.

So today finally came round after months of preparation, I set off in good time, got lost, went round in circles, and finally found my way to race HQ with half an hour to get my number, rack my bike and sort myself out.

I looked around at the sort of people participating and wondered once more why the hell was i there. Headed towards the start for race briefing, once more reminded of the tough long race ahead. I felt pretty good on the whole - well rested, well fuelled and raring to go.

Set off towards the back of the pack (around 400/500 i think) and got into a rhythm that felt really comfy, after a few mins I checked my hrm and its said 90%, I gathered it was adrenaline, slight incline, start of the race etc so carried on at the same pace. I looked again a few mins later and it was still around 90...I decided to let my legs dictate the pace for a short while as i was feeling comfortable and wasn't blowing and puffing.

Hopefully the psychology of this helping me get through it without thinking too far ahead.

It had been said that the water station would be at 4 miles, so imagine my surprise when it appeared after just 22 mins - no I hadnt' run 4 miles in that time! so this split my run up a bit differently to planned.

The route was for the first 5/6 miles largely draggy hills, some steep short inclines, some steep down hills. The finaly 2/3 was where it got nasty. Some long hard hills, sharp bends, and more long hills that just didnt seem to give in.

I actually got through the first run feeling pretty good, a comfy speed, overtaking a few poeple, not feeling like I was pushing too hard, trying to remember that i needed to try to maintain the same pace for the first and second run. However, my HR was between 85 and 90% for the whole of the first leg.

Towards the top of the longest hill on the zig zag road were a big group of supporters who were there throughout the entire race, whistling, and dancing and cheering and I believe if they weren't there a lot of people would have faded.

So off the run, through to transition, checked my watch, 60 mins and 30 secs- top notch. Was really pleased with that as I was thinking I was prob 8 min miling and hoping for about 1hr4 I'm pretty good at making up speed on the downhills though when some people get scared of going to quick I throw myself down.

I didn't rush transition (I'm notoriously bad at this!) , changed out of my running stuff and put on a warmer top, (had to turn it the right way round first!), shoes off - untied the laces as I thought it would be easier to have them ready for the next leg, shoves some snacks in my back pocket, helmet on, shoes on, finally got the bike down and started the 100m dash across the field and track to the road to mount. Took me over 3 mins in transition! :-P

So on to the bike, the first stretch was hillier than i thought it was, so had some water, some grub and settled onto the bike for a few mins. Then got going. The route was the same as the run loop, the sharp corners making it tricky in places, the damp ground making it slippy. After the run I decided to split each bike lap into two as well, of 5 miles and 3 miles, he first 5 were really fast, I'm not what you'd call a "cyclist" and I've never gotten to overtake people on the bike legs before but I was going past quite a lot, flying up the long drags faster than I used to be able to ride the flat. The second section of each lap were where the steep slow hills were. I had a swig of my energy drink, and fumbling to put it back in the cage, dropped the bugger!! So now i had to do the remaining 20 miles of the bike with only water and half a trek bar.

There was a guy and me the whole of the first 2 and a half laps, overtaking each other, taking it in turns to go past, him getting me on the short sharp, me getting him on the long drags. Every time we went past each other, we'd take the piss out of each other. The second half of the last bike lap I kept hearing my watch beeping to urge me to work harder, so i'd kick in and push on, if not for this I think I might have flaked out... that and the amazing people of the big hill yelling and cheering as i overtook some blokes.

Round the final bend and into transition again.....1hr36 got off B, gave her a kiss and ran through. my toes were frozen!! knees werent happiest after the hills, another slow transition and luckily I had another bottle of energy drink in my box so took that out on the last run., though my bladder was already full and threatening to explode....

My feet took 20 mins to come back to life!

For the final run I decided to split it into 3 - first was upto the drinks station, second to the bottom of the hills, final was the last couple of mile stretch of hills.

I've never looked forward to hills so much as that last leg, as I knew it would mean I was almost home. The final run was tough, my hrm kept beeping at me, so the only thing I could do to shut the fucker up was to run harder - each time taking a swig of drink. I was still overtaking people and trying to pick them off one by one. I knew iIwasnt covering the ground very quickly but just concentrated on putting one foot in front of the other and keeping moving.

Up the final hill, I hi 5'ed a fe of the supporters, shouted to a marshal "I've still got my balls!!!" over took a couple of people now walking, came up to the fnal bend and sprinted (sort of) as best I could through the finish. Time was 1:07

Totally over the moon with todays race, I'm really happy with how I prepared and trained for it and how I performed. My total time was 3hr50 which I'm dead chuffed with as I was aiming for under 4. Plus i was 5th in my category :-)

I was paranoid about getting a puncture (and there were a lot out there today) so i need to get some practice in regulraly to be prepared for that too.

It wasnt as bad as I thought it would be, partly maybe because iId been imagining the worst!! But I absolutely loved it and I think possibly my highlight race of the year - I'm going go to go back next year and aim for a sub 3:30! :-)
Posted by anna at 22:44