I'm not sure where to start on this without it becoming a massive epic, part of me wants to keep it short but I have so much to write about it almost needs a whole blog but I think i'm going to try and keep it brief.

Me and Suzie entered this last year and it was oringally it was going to be my main event - but then I signed up for Switzerland Full Iron Man for the end of July, so this became my B race - or a warm up (!!)

My running has been suffering due to various injuries and haven't really been able to put in the time on my feet I'd have liked and i'm also very lardy at the moment which isnt helping a) my speed and b) my head.

We arrived n Orlando (Disneyworld no less) on Friday afternoon, after a giggly fun filled (but long) flight over, the worry of the bikes getting damaged in the hold was my main issue up to now.

When we got to our log cabin (very little house on the prairie) we upacked and reassembled our bikes - phew all was ok with them! I went for a little run whilst suzie rode her bike alongside, and we had a little mooch about and found the shops etc. even at 8pm it was really hot and humid.

Saturday we had to register and rack our bikes. Suzie wanted to go for a run, so I rode and checked my gears and brakes were all working ok whilst she ran, then we went to register and eat a "large" breakfast! going by the endurance fuelling method i use of large breakfast, moderate lunch and small dinner. Well we werent even hungry until dinner time!

after setting everything up in transition for the following morning, we set off back to the cabin got our kit ready for the morning and waited for my one of best friend'a Ellen and Suzie's friend to arrive (and soak up some sun )

We needed to be at the start for 5am to get marked up so set my alarm for 4am and i did something i never do.... slept through it! 4.30 and Suzie luckily had woken up so flung open my door and i crawled out of bed and we got ourselves fed, dressed and down to the start.

The Swim: 1.2 miles open water
The swim was set off in 22 waves 3 minutes apart by age group categoryy, mine was due to be set off at 7am, Suzies at 7.06 so we got to watch the Pro's get off and show us how its meant to be done! I was in awe. A pro woman (Emma Kate Lidbury) who some people from my club know was racing and i saw her warming up before the swim. That's how a triathlete should look - not a big whale! :(
Suzie and I hugged goodluck, somehow getting black ink on our faces off each others arms from the numbers.... 6.58 came and I was lined up next to 150 or so other girls in pink hats (each wave had different colours on)

The water was 84 degrees so wetsuits werent allowed which i'd been shitting myself about. But when the Klaxon went off and i ran in trying not to get too close to the quicker girls, it was so warm and relaxing i didn't mind it at all and got straight down to business (business being flapping my way through the water aroud the buoys (or as the yanks pronounce them - boo-eees)

The swim itself wasn't too eventful, i really enjoyed it mostly, i found myself overtaking the waves ahead (well the slow people) and getting overtaken by the faster swimmers coming from waves behind, so i rarely had any clear water had to stop a couple of times to regroup and get out of peoples way but nothing major. There was the odd patch of water that tasted of diesel - which was nice. and on the return jounrey i was using the person on my right to stay straight and totally took for granted that they were going the right way, and went so far off course i nearly went past the canoes!

I finally exited the water to cheers (something that didnt stop all day  - its amazing what a big crowd 2500 competitors will draw in) and ran up towards transition, my exit time on the swim was 43 mins and i was 31st in my age group, which i was made up with, this is the furthest i've "raced" in the water ( I late found out an Aligator had been spotted out there!!)

Transition 1
There was a long run up to the bike transition area through bark chips which stuck to my feet. i dried off a little when i got to my bike cleaned up my feet and got into my shoes, slathered on a thick layer of factor 50 and set out on the bike.

The Bike: 56 Miles
I love my bike and i love riding her, and this course was great, i felt good from the start, it was a bit windy and slow getting out of the campsite but once out on the open road, there was miles and miles of smooth fast road, i overtook plenty of people which i loved keeping an eye on my HR trying not to go to lactate threshold, there were a few slight climbs and the last 10 miles was into a head wind, I reached 41 mile in bang on 2 hours so i thought i may get 2:45 which is well above my expectations. I had a few issues getting drinks on the course, knocling them out of peoples hands, having to slow almost to a stop but had a great ride, went totally to plan and i came in in 2:52 which i never in a million thought i'd do. There was an instant i thought i was gonna come off - a bus went past in the other direction and the draft sent me flying! I got to see Suzie out there a couple of times pasing each other in the opposite way and yelled and waved.

Transition 2
I ran back in with my bike and saw Ellen cheering at the side and gave a wave, fannied about swapping shoes, putting on a hat, and tying back my hair, i needed a piss too so ran into the portaloo where i promptly found myself tied into my shorts so took ages untying them! 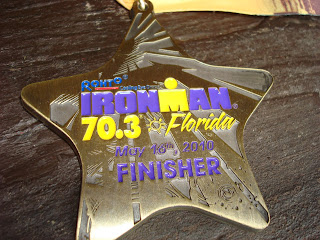 Well fuck me, this was the worst 13 miles of my life. I got out to a good start of 8 min miles but remembered what i'd been told about trying to hold back and maintain a slow consistnet pace in preparation for the full monty. On the bike i'd not realised how hot it was, it was coming up to the hottest part of the day and the mercury had been in the 90s for the last few days.
The run was 3 loops, largely on grass with potholes, a pictresque swamp! alongside. Noone out there could understand why the run route didnt go along the nice trails of the campsite through the shade, but no, it was all open in beaming sunshine.
There were aid stations every mile, 2 sprinklers and lots of crowds.
I got to 3 miles and realised i was going to have to push out this last 10 miles.... i was in hell. every aid station took a bit longer to reach than the last, i couldnt get enough fluids in, i was constantly thirsty, i'd stop at each station to shove ice down my top, drink some coke and some water. i couldnt eat by this stage, my stomach had shut down. i tried to break the run down but all i could think was "i've got 3 loops to do!!!" and "how the fuck am i going to do double all this??"
just coming out of the first loop inot hte second i saw Suzie, i gave her a woop, i was surpriesd to see her so sooon off the bike. but really please for her, she must have done a stonking bike!


The last 8 miles were just hell, a guy (my new best friend at this point in the day) came alongside me and asked if we could run together for a while, and i agreed, we chatted a little, i was a lap ahead of him, he was struggling too and on for a Personal worst for the run too. We kept each other going, to each aid station where we'd pour water over ourselves, drink what we could then get back out there. I felt bad when i got to turn off to the finish and he had another lap to go, i wished him well and got his number (race number not phone number!) so i could look out for him at the finish.
I finally went through the finish to more cheering in a total time of 5hr 55 and 16th in my category. My target was sub 6 so just scraped in.
I went to cool down in the lake where i then found out noone was allowed back in cos an aligator had been spotted!!
I went back to the run course and waited to see Suzie, she passed me on her last lap and i told her i'd wait for her at the finish post, so went and found Ellen and Luke and went to the finish line to jjump about and yell.
The rest of the time there was spent eating drinking and a bit of training now home, even fatter and shitting myself about a small matter of Switzerland IM in 9 weeks!! Eek!
Posted by anna at 22:23