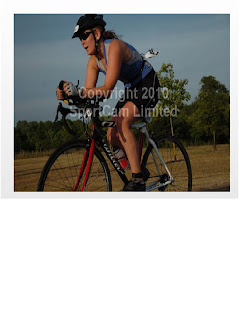 Part of the Triathlon 220 evening series, I hadn't done the first one, but entered for this one. There were 3 start times to choose from, so I went for the latest at 7pm as I had to drive an hour from work to get there and didn't want to rush too much.

My mum came down with me as she's not seen me compete Triathlon yet and it's a great venue to see lots as you can see the lake, each bike lap and the run turnaround and finish.

Dorney is the home of Eton Rowing Lake and is a brilliant venue, the lake is clean, the roads are free from traffic and deadpan flat, what more could you ask for.

The event itself was really well organised too, i was really impressed.

The evening was really warm, as we're in the midst of a heatwave, i could see the other waves coming through transition and noone seemed to have wetsuits on, so i decided I wouldnt either as i'd look like a plonker. I'd swam Florida half without one so wasnt too worried although I was dubious that the water would be as warm as Orlando!

When i went to register, I found out that wetsuits were actually banned as the water temperature was above 23.5 degrees, so that was taht really. A few people were fretting but mine's a bit tight cos i'm a fatty anyway so i'm happier without - at least I don't get strangled!

After racking my bike we were called for the pre race briefing where we were told the course - once lap of the lake round the 4 bouys, of 750m, out through transition onto the bike, 6 laps of the marked course, totally 20km, back through transitoin and out on to the run, 2 laps of 2.5k each, back through the finish.

Each section and transtion was chip times so you could get a split for each leg accurately.

The swim was a deep water start so we got in (it wasnt cold at all, it was really refreshing) and made our way to the start posts and skulled until the gun went off.

I tried to stay nearer the back so i didnt get swum over too much, and I felt I was in an OK position in the water and set off, I swam Polo style for the first few meters whilst I found a path to take, as there were arms and legs and feet everywhere (there were about 150 people in the water - in zurich there will be 2400!!!!)

The first 200m was a struggle, I kept getting dunked, and punched, and splashed, and inhaling water I started to panic a little and considered putting my arm up to get the lifeguardd to fish me out but thought that was totally pussy so carried on and found some space. Ther rest of the swim was pleasant, it got a bit choppy about 150m from the end but as I came to the bank with wobbly legs, i could see I wasnt last!! That was enough of a result for me. I looked at my watch and saw a 16 on the numbers! (My official time was 16:42) This time is great for me, I'm shit and my first open water swim in the UK with no wetsuit.

Transition wasnt too much of a pickle as normal, i faffed a little putting socks and gloves on but better to be confy right? T1 took about 90 seconds.

The bike was brilliant, the road was so smooth, and althoguh there were a lot of people out of the water in front of me and i had to do some work, i began trying to chase people down, it was a bit difficult to know where thery were in teh race though - they could be on the 3rd lap for all i knew! I pushed hard for the entire thing, the home straight of each lap was pretty blowy but i still kept in control, i had to keep fannying about with my HR monitor as it had slipped down during the swim, I know its not really the place to fuck around but I was trying to keep tabs on it as my training for the IM has been based on HR.

I overtook lots of peoplee, was overtaken by a few (including someone on the same bikeas me - "nice bike" i said as he passed)

I came back into transition and looked at my computer which said i'd done the bike in about 37 (37.06 was the officila;) so again i was realy pleased, i'd given myself a target of sub 40 and this was it. And an average speed of 20 mph isnt bad either, shame there weree those turns at the ends as i reckon I lost a bit on them being wimpy round them!

I got through T2 in 1min 1second, this is great for me, as i'm renowned for being shit in transition!

The run immediately felt hard work, my legs werne't burning they were just a bit heavy, i was paying for the bike leg. I just focussed on picking people in front off one by one. I was only overtaken by one person on the whole run, i checked my watch at the half way point and was heading for a 23 ish time, pretty shit but not much i could do. Mike had text me early telling me to leave myself empty at the line, I knew there was more in there, but I realy struggle red lining, knowing my luck i'll empty just before the line.

I hung about a bit with my ma, and watched the winners get announced - first girl was a 16 year old called "Sky Draper" I'm not sure if this is a piss take or what but she was fucking fast 1hr01!

I was 10th lady overall and 4th for my age group so a pretty decnet result for a novice like me :)
Posted by anna at 20:20