It was a pretty much perfect race, but why am I not jumping for joy? 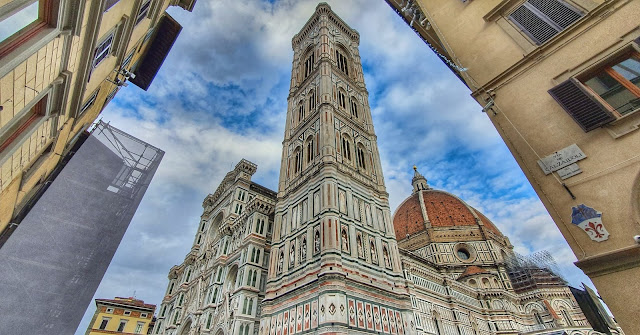 This race is a weird one for me. I had entered this in order to try to get a championship qualifying place for London next year. I already have a GFA place but I really want that extra step up. This would be either a sub 90 minute half marathon or a sub 3:15 marathon by the end of December.

So having had a wonderful summer of adventure - two self supported runs - one through Corsica and one across Scotland. I was fit and strong, but full of hills rather than fast and flat. I had entered Swindon half marathon at end of September and Valencia marathon at the end of November. Both with half an eye on the prize.

I had a few weeks of specific training before Swindon where I focussed on half marathon pacing, making a surprisingly good transition from scrambling up mountains and running over hills to the fun of flat roads. I love the structure of road training as much as I love the freedom of Mountain running, so I'm fortunate to switch between the two fairly seamlessly.

Something happened (I'm a moron) and it turned out I'd not paid for my Valencia marathon entry so a quick Google search and I found Florence the week before so got my entry into that.

Anyway, Swindon half marathon was brilliant. I ran a great race on an exceptionally soggy day, and got a 3 minute PB, even with having to stop twice to re-tie my shoelaces that didn't want to stay done up in the puddles. Yet I was still a couple of minutes shy of that sub 90 - I knew it would be a big ask to ask for 5 mins off my best on a course that has a bastard hill at mile 11 so I was very happy with the outcome. It was a solid effort and coming in 7th lady and 3rd in my AG I had nothing to complain about. 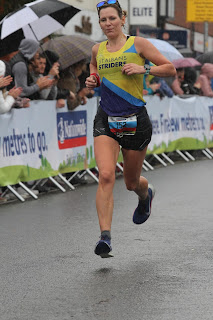 My recovery out of Swindon was surprisingly slow. I was really struggling with my mojo, all my training runs felt laboured a few weeks later even. I felt completely off form and Florence was already coming up fast. I was sending panicking texts to Robbie on a semi frequent basis, him doing his best to convince me that it would all come together on race day and with a good taper - blah blah...

I was doing my training runs with sub 3:15 in mind, but really not feeling confident that I would achieve it. Three weeks out and I really wasn't feeling it. Comparing to how I felt coming in to London, I was a different person. Not at all excited, no confidence, tired. always tired. I just wasn't looking forward to it. Neither was I dreading it. Just a bit "meh" I guess.

It's an unusual time for me to be training for a goal race, normally I'd have done my big race of the summer and be winding down before Christmas, so I put it down to this. 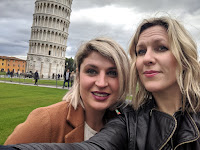 Anyway, I tapered well, signed off from work and me and my friend Issy headed off to Italy for the weekend of sight seeing, wine and all the carbs. We had a lovely night in Pisa, with lots of walking and wine and gorgeous food. 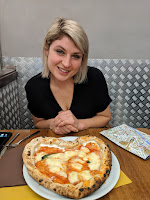 We then got a train to Florence on Saturday, checked into our hotel and had a walk around the city, picked up my race pack, ate THE MOST AMAZING PIZZA OF OUR LIVES. Honestly. There has been nothing like it. We did some sight seeing then went back to the hotel for a lay down, back out for more food and some wine, picked up a sandwich for breakfast and had an early night. 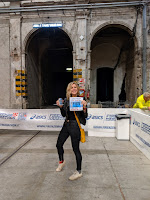 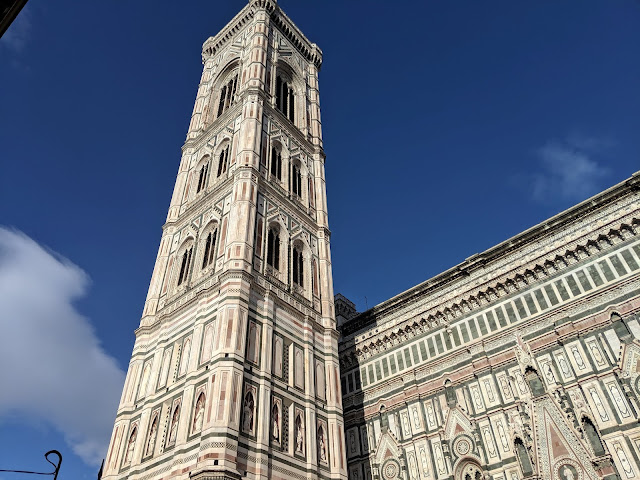 Race morning, I wasn't excited, I almost couldn't be bothered. I started to feel a bit of the usual nerves as we walked to the bag drop. I said goodbye to Issy and went to my pen to start. The start was beautiful, right in the centre next to the Cathedral. Weather wise it was perfect. No wind, cool and sunny. The race got off to a start, I was in one of the front pens that took a minute to get through the start line, it was very narrow to begin with and people were jogging. Fuckers. Get out the way. Honestly, how people position themselves in the front to then jog off at ten min mile pace boils my piss (don't I sound like an arsehole!?) 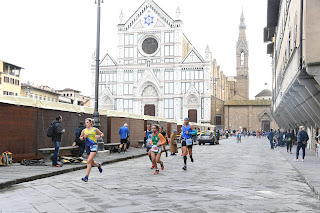 I spent the first kilometre getting myself past joggers, finding some space then setting into my stride.
I did have a plan in my head before the start which was to start out at 4:41 pace (PB pace) then try to build in the last 10k to 4:35. What actually happened was I found myself bobbing around 4:30 - 4:32 pace for the first 10k. I knew I was going faster than i intended but it felt really comfortable so i just went with it. 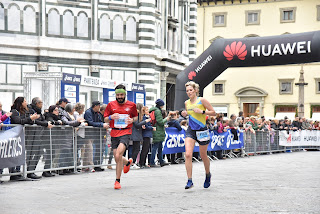 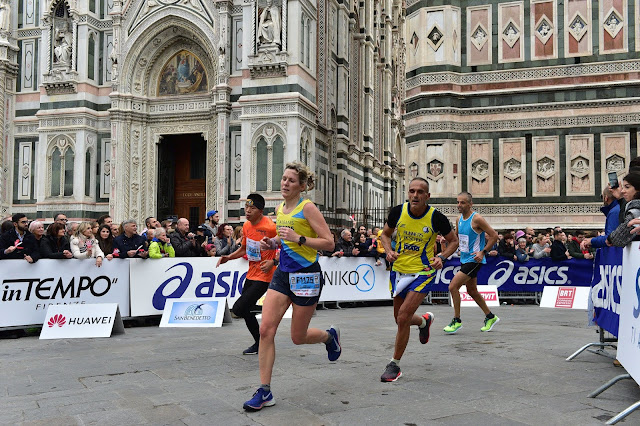 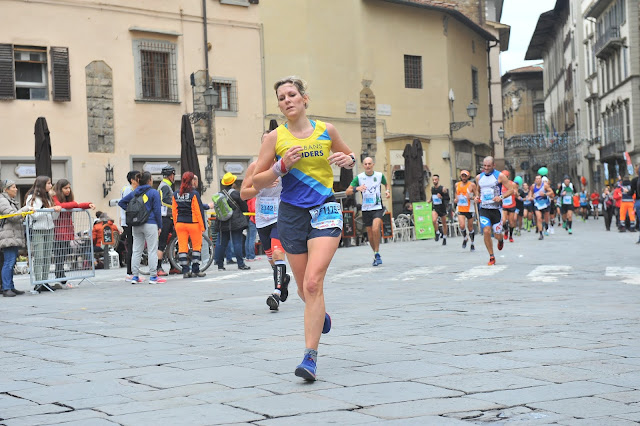 I stopped for a wee in a bush about mile 6 which brought my average back to around 4:35 which would have secured me a 3:13 ish time.


My ITB had been giving my some gyp the weeks running into the race and I could feel it bothering me from the start.

Weighing up what my excuse would be when either my wheels fell off or my ITB took me out over the next 20k.... neither of which happened. At some point I was convinced I would realised I'd written a cheque my legs couldn't cash. What started going through my head was not "if" i went under 3:15 but "how much".... this was a new place to be in, yet I still felt quite comfortable, if not a few seconds faster than I ever expected to be going at.

I knew that at my current pace, I had nowhere to go so any ideas of picking up the pace over the last 10k were gone, if I could maintain this pace I'd do amazing.
Coming into the last 8k, thinking whether I could be bothered or not....  I was getting a bit weary and the cobbles we were now running on were beginning to tire me out with concentration, running through the city was annoyingly winding, slowing things down when I was already starting to tire. I was going to do it though! I was going to get in, in around 3:13 by my calculations. I was constantly re-calibrating when I'd get through the line. I had this! But why was I still not feeling elation? 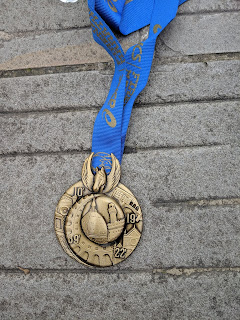 I came through 40k, still on 3:13 target. I was going to do it. Yet I still wasn't feeling the love. Very quickly - too quickly, the 41k marker appeared. I looked at my watch, I'd only covered 400m since the last marker. My guts skipped. My face dropped. The course was going to be short. I was already so, so disappointed because I knew the course would then be recorded as a "Short marathon" and therefore wouldn't count as my qualifying place. My time was 3:11:01 and I was 42nd woman of 1600. I should be jumping for joy. My pacing was amazing. I had such consistency - I mean isn't that what I've been training for, for the last 5 years? 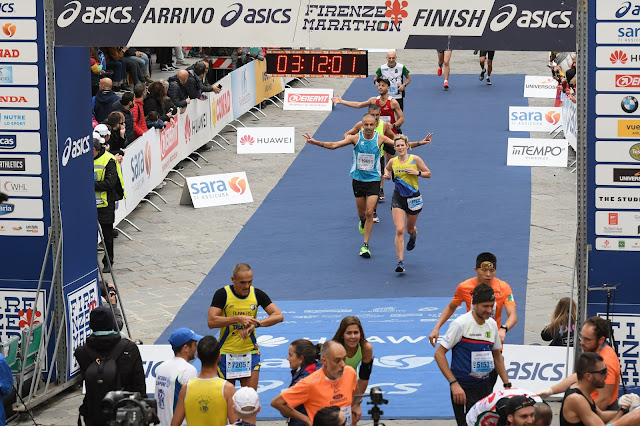 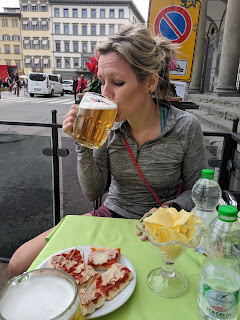 We went for a beer and for some more of THE MOST AMAZING PIZZA and then celebrated with a nap.I text Robbie and a couple of friends that I'd got the time but the course was short so it won't count. I was gutted. Even though I know in my heart that even on a full course I would have been safely under the time, but I just felt so flat. I know it's ridiculous, I know it's completely irrational and I should be so so happy, as if I'm honest with myself, I had a near perfect race. Yet I feel a little cheated.
To be fair to the organisers and a race of 10,000 - they did a brilliant job in circumstance that couldn't be foreseen. A gas leak on the course at KM 42 meant they had to act quickly to divert the course and reducing the official distance by 600m. So I'm not blaming them. It was unfortunate and I'm positive if I contact VLM with my time they would have no problems in extrapolating my time and letting me run in the Champs pen, but I would feel like a phony.
I have one last attempt to get a sub 90 half now before the end of the year, which as long as I'm recovered, I'll have a bash. If not, I'm confident in my ability for London next year. Issy was a wonderful support crew as ever and Robbie as always was right. I'm not a bad runner ;-) I've made my peace with it and I realise I sound like an ungrateful brat.
Posted by anna at 19:05