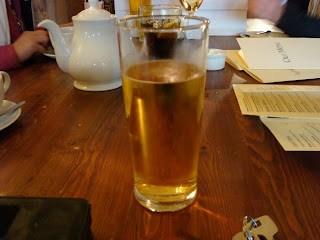 Initially all I was going to write in my report was"What were we thinking?"

So today was my annual pilgrimage to "Cockhill" for swindon half marathon, last year i came 15th and I wanted to come top 10 this year and had been instructed to beat a lady from running club who apparently complains that i'm quicker than her and genearlly doesnt seem to like me.

This weeks training had felt way better than last week and my legs didnt feel like they had been replaced with lead so was reasonably confident of a sub 1:40. Its not a pb course (for me) as its a pretty hilly course - starting on "cockhill" for those who recall cockhill, the c0ck has now been removed - much to my upset.here's the course profile...

So last night KathyAJ came down to swindon to stay and do the race in the morning. Had planned a subdued meal of carbage, early night and run a course PB.

Of course this didnt happen, kathy's a really bad influence and i'm easily led, sure fire recipe for disaster no?

I shouldn've known when i parked my car somewhere in town that would be safe to leave overnight without getting a ticket it was going to get silly. We got to bed around 4.30 this morning after consuming 3 and a half bottles of wine, cocktails, quarter bottle of polish vodka and some nasty shot my friends put in front of us (kathy necked hers, i tasted and gave it to a friend) woke up at 8 still wibbly wobbly pished, tried to wake up an unconcious kathy, gave up, made us some AnnaB podge, finaly managed to wake sleeping beauty, ate podge, necked a few painkillers, water anything that might help the morning appear nicer.

After having to make a detour to the race to borrow my sisters trainers for kathythedipshitwhoforgothertrainers we got to the race. vaguely aware of what i was about to do, i thought it was a bit of a silly thing to even be out of bed. Saw a couple of friends at the race HQ, then realised they were about to start the race so wibbled off up cockhill towards the start but they then started the race and we were right at the back of the pack.

I tend to start quite near the front to avoid getting stuck. and stuck i got for some time behind a couple of people dressed as clowns - i told em to stop clowning around - they didnt have a sense of humour and looked at me like i'd just drowned their dog. (they didnt have a dog)

I wish I could remember the race itself but i think i was still drunk through the entire thing. All I can really recall is that the first half i was constantly holding back what was either snot or puke. I didnt actually barf this week thankfully as i didnt go fast enough, i just wanted to finish and go back to bed. The second half all i recall is trying desparately not to do a radcliffe (i'm classy innit )

Finished in 1:44, a good deal slower than last year but i'm pretty happy with this considering i probably wasn't at my best!! my legs felt pretty good today, but that may have been the anaesthetising (sp) benefits of ethanol.

Weather was perfect for it with light drizzle which turned into pretty rainy rain after, so went to ma and pas to shower, then went to sample the delights of Sally's Pussey, inhaled a carvery and now back in bed i've decided now i'm going to stop arsing about and start playing properly now and focus.

lady from club beat me by 2 mins dammit!! she was too smug for my liking!
Posted by anna at 22:15