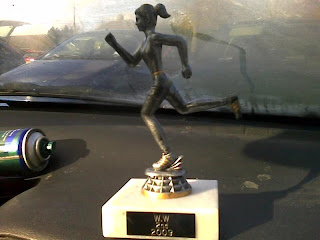 I fancied a change and bit of recovery after a few months working hard pounding the tarmac, so i'd planned either doing avebury 8 or wickstead wander and not going balls out. Avebury filled up so i went for wickstead instead.

It's a new race this year in Highworth, 5.5 "country miles" (which i'm assuming means inaccurate and probably measured using cows?! :-) across fields and a cross country course (horse one) i've ridden round the jumps before and it's lush. Raising money for RDA.

I arrived just in the nick of time to enter and get to the start, probably about 150 runners, 3 of which were men cross dressing for the occasion - one of these is a guy who wins pretty much all the local races. I'd borrowed some running spikes from a lady at running club but i'd stoopidly forgotten them! Big mistake.

The race briefing... "there are cross country jumps as obstacles.. they're not compulsory, but st johns ambulance are on the course!" :-P

Despite all the rain the last few days the fields weren't too muddy, a bit skiddy in places and some parts were boggy but mostly it was sruface water, still spikes would have been handy!

So the course..... set out across a field, onto a track, down a steep hill, through some slimy farm with sh1t everywhere. across ploughed fields, round some more, over (in my case through) a deep ditch ankle deep with water.... splash splashh through more fields.... i could see i was leading lady and someone said "well done, first ladies through" plural? glanced behind and there was a lady just behind me, she overotok me up another hill.

Then came the cross country fences.. some of them werent optional cos you couldnt get by without it. but it was all good fun so clambered over them... then through a water jump... knee deep and when you ran,, got soaked form head to toe! Up a big step out of it, over anohter jump, across more fields, over more jumps.. lady who overtook was never more than 20m ahead of me so i though i could possibly catch her if i dug in. But i still had a way to go so didnt feel ready to speed up, overtake, then maintain that pace.

Through another water jump, up some more hills, over more jumps, back over the ditch from before, back up the track - the hill was waaaay steeper than on the way down and i was really blowing and struggling. It seemed longer than before too. Lady was increasing the gap and i knew i wouldnt catch her now.

Finally got to the top of the hill, back across the final field and through the finish. 2nd place :-) and wona coool trophy!! :-)

Spoke to the lady who won after and she was lovely and i don't mind being second to her cos she was really un-smug about it and is a triathlete too. She finished a minute ahead of me in the end, there's no way i could have caught her, she did good. she said though that if it was another mile i'd have overtaken but i dont think i would have as i'd had enough by then.

"did you used to be blonde?"
"yeah, are my roots coming through!!? sorry, who are you?"
"i recognised the tattoo on the back of your neck, i wasnt suer if it was a bassett hound thing or you were the same person"
" ahhh.. you've been behind me before then"? :-P
"haha, yes. Are you doing the xc series"
"no, i dont do xc..... this was a bit random, plus i think it was more of a steeplechase!"

he was saying i should go for this xc championships in a couple of weeks that i was pondering... but i'm realy not sure.... that or eynsham 10k?? mmmmm...

Anyhooo, chuffed with today, legs are still a bit heavy from last week so gonna have anohter gentle week before a couple of races next weekend.
Posted by anna at 17:10

Labels: mascara, various shoes and hulk hands..., you might woinder why i've a can of hairspray in my car... what you can't see is the pile of clothes