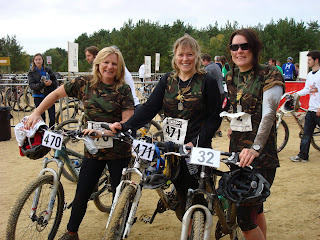 I'm not really sure what to say about this....

Ummmi'll start by sharing the link http://www.grimchallenge.co.uk/grim-duathlon/some time ago, Penny suggested we do this in a half hearted jokey way - much like i jokingly suggested the TR24 this summer - and look what happened there!!?

So suddenly we had a team - Penny, Suzie and I, Penny's a pretty competent off road cyclist, i'd been off road maybe 3 times - one of these this week, and one on an interesting MTB skills course with Suzie, which due to my shit navigational skills we managed to miss, and ended up just going to the pub.

The course was a 5k off road run round the army testing thingamy in Aldershot, 20k bike course, followed by 5k run course. We rocked up this morning, in matching camo gear, war paint, cockshaped pasta dog tag necklaces and a massive cock cake in an even more massive box! I can't begin to tell you how many nice bums were on display, mtbing is quite frankly a bum biting girls dream! (no bums were bitten however)

Due to me being a numpty and screwing up our race entries (i nearly ended up doing it solo!) our bikes were racked at differnt ends of transition. so we racked our bikes,taste tested some cliff bars (tasty) had a team photo and went to the start.

Of we popped. first 5k through lots of big puddles (lakes) spoloshing and skipping about half way was a cargo net you had to crawl under, though noone was crawling just crocuhing thru it. water was freeeeezing, some of the puddles were sneaky - lookinglike they were just ankel deep and you'd drop to your thighs )or in Pennys case her waist!)

Back to transiton and onto teh mtb's, the first few k were pretty straight forward, gravel track, we thought it was fine... through the puddles, splosh. sploooosh, weeeee, about half way round it started getting pretty technical - puddles getting deeper, tracks getting narrower, bouncier, sticker, disc brakes getting stuck with grit, people flying past getting snotty that we were fannying about giggling in their way, part of it you have to get off and carry your bike through this stream, another part was amassive puddle everyone was going to the right, i didnt know why til i decided to go thru the middle... and sunk! pretty much submerged to my hips, dragged myself out of it. caught up with the other two more puddles, mud, back to transition.

Backout onto the second run and lots of people seemed pretty tired, we were still really bouncy(for some reason!) the last lap was so much fun we spent the entrire time, either up to our necks submerged, pushing eah other, splashing other completitors, face down under the cargo net heckling the boys who didnt wanna get mucky.

We decided that we'd finish in style (sort of) and so did the 4 legged race through t last few hundred mtrs to the fininsh, so we used a race belt, and my batman bandana and tied ourselves together, somehow managing to make it to the end, in fits of giggles, unfortunately, the massive crowds didnt seem to get our sense of fun and there was a lot of tumbleweed rolling about.

Amysara and Rachel1n came to meet us at the finish and we alll went for lunch (and maybe a cheeky half)There was blood, sweat, tears, a sh1t load of mud and water, and a massive amount of laughter (and the mandatory **** cake for affters)took my bike to the carwash and gave it a power wash i shoulda got in there too! had a totalyl fun day and thoroughly recommentd it to anyone mad enough. thanks ladies for a brilliant weekend - i cant wait to see the pics xx
Posted by anna at 22:17