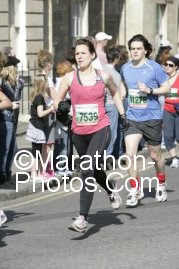 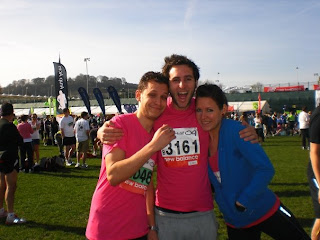 Just back from bath... had a lovely day, this whole week my quads have felt horribly tight and i'd half thought about not running today but decided to go for it anyway. i ran under an alias today and am very grateful for the number as it was such a gorgeous day to be out running.

It was like a festival when we got there, sunny, bustling and music playing. The start was set off in "waves" to stagger it which worked really well. It was delayed by half an hour which was a ittle annoying as i'd timed my food/pre race stuff to fit the scheduled start and was getting hungry at the start line!

Despite the busyness of the course i covered the first mile in 6:40 and pretty much kept around 7 min/miles for most of it... got to the 10k marker at 43:30 and was a few mins inside an hour at the 8 mile point - in whicch i'd hoped to be an hour so all was going to plan.

The last 3 miles my quads felt incrediby tight but i clung on and finished in 1:35:43 and am very happy as this is nearly 5 mins faster than my previous half and PB.

My two friends who did it with minimal training also did well 2:03 and 2:15 - for two boys who drink too much and did very little training (one not running for 6 weeks prior to today and the other having run 6 times!!) Was a really lovely day all in all and the crowds were amazing i particularlly loved that people who lived through the ccity played music out their windows.xx

p.s. the only bad thing about the day is we had no time for a shandy after, so i might have one on the train to manchester later
Posted by anna at 23:56